the history of chocolate

Dive into the wonderful world of chocolate for a incredible travel through the ages !

all you can eat !

Choco-expert who can describe hidden flavours of origin chocolates? Or just chocolate lover to try all the chocolates ?

Live demonstration every day, all day long, just for pleasure. Kids and adults are most welcome !

Join one of our worshops for kids or adults to make your chocolates! Reveal the choco-power in you!

for the whole family

A playful tour for kids is available to have little brothers and sisters to discover the world of chocolate… with FUN ! 3m height, 200kg chocolate for a more realistic sculpture than the building itself! Discover the area dedicated to whatever you could imagine with chocolate ! the most famous fans

Who are the famous chocolate-lover celebrities? Find out who left their mark in our Wall of Fame!

What will be the next chocolate experience?

If you think you saw everything about chocolate, there is still some experiences to create!

Discover the history of Chocolate

Explore the wonderful universe of Chocoalte for an adventure trhough the ages!

Choco-Story, the gourmet chocolate museum, recounts 4000 years of the history of cocoa and chocolate in words, pictures and flavours. The museum immerses its visitors in the amazing world of chocolate and leads him through a fascinating voyage over the ages. The experience is intense and awakens the senses..

The museum is composed of three separate parts that tell the story of the origin and the evolution of chocolate by means of a unique collection of a thousand objects..

Beyond the historical aspect, the museum also recounts in detail the methods of making chocolate, the ingredients that are used and how making chocolate has evolved over the centuries.

The visit starts with the cocoa tree that provide us with chocolate. You will discover what makes this tree so special and what it requires to produce the beans that we turn into this delicacy called chocolate…

The Maya section explains the mystical rituals of the Mayas and the Aztecs, illustrated by superb, authentic objects. The Olmecs were the first people to start using cocoa 4000 years ago.

Then the Mayas, from 250 BC to 900 AD, who originated from a civilization that had very advanced knowledge of architecture, astronomy and mathematics, perpetrated and refined the use of cocoa and laid the foundations for the cultivation of the cacao tree.

Thereafter, the Toltecs and the Aztecs (from 1150 AD to 1500 AD), took over the cultivation of the cacao tree from the Mayas. They venerated the cacao tree which they called “the tree of Paradise”. At this time, cocoa was a bitter drink made from cocoa mass, water and spices. The different civilizations at this time considered cocoa to be the “divine nectar”, the food of the gods and for the gods. The god Quetzalcoatl (the feathered serpent) traditionally plays an important role in the history of cocoa; he was said to be the great master of cocoa and to have taught man how to grow and prepare “Tchocoatl”. In the Maya section, visitors can admire a statue of him.

Did you know that cocoa was not only used to prepare the divine nectar, but also as a means of payment? Cocoa was very valuable; at the time a rabbit cost 10 cocoa beans and a slave would cost 100 cocoa beans.

The second part begins with the important meeting in 1519 between the Aztec emperor, Montezuma, and Hernando Cortes which subsequently led to the introduction of cocoa in Europe.
In 1502, Christopher Columbus was the first European to taste the “Tchocoatl” drink made from cocoa, but he did not really find it to his liking and paid it little attention.

At first, Spaniards didn’t enjoy that much this beverage coming from the New World. They ended up loving it after adding sugar to it! In 1527, Cortes started to import the precious cocoa beans to Spain. “Chocolate” rapidly became the favourite drink of the court of Spain from where it gradually spread to the royal courts of the other European countries in the 17th century: notably to France, Italy, Germany and the United Kingdom.
In 1615 the chocolate drink was served at formal hearings held in the court of France.

By the mid 17th century the first tearooms and “chocolate” rooms started to appear.
The museum’s superb collection of chocolate cups (Mancerinas and Trembleuses) as well as the different types of chocolate pots made out of copper, silver and various other materials, are witness to the growing popularity of this drink in Europe. Up until the end of the 18th century, chocolate drinks were nonetheless a delicacy reserved for the nobility, the upper classes and the clergy.
Chocolate was also on sale in chemist’s shops and stores selling spices, in the first case to sweeten the bitter, even utterly disgusting taste of certain medicines and in the second to improve the taste of food.
Chocolate was really only appreciated in its own right towards the end of the 18th and the beginning of the 19th centuries.

Up until the 18th century chocolate was manufactured by hand. The manufacturing process was considerably improved during the industrial revolution and chocolate experienced its moment of glory in the 19th century.
The development of production methods, the selection of the finest cocoa beans and the improvement in methods of cultivation all contributed to producing a highly refined product, such as we know it today

During the 19th century, the manufacture of chocolate started to diversify and it could be found in various forms, both liquid and solid, as milk chocolate, chocolate bars, hollow figures and pralines. From this time on, everyone could have chocolate!
The museum takes you on a walk through the 20th century, starting with an introduction to the manufacture of chocolate at the beginning of the century. Enter into the fabulous world of a chocolate factory in the 1950s where the melting machine and other utensils take pride of place.

ALL YOU CAN eat

Novice, expert or simply a gourmet, come and try all our chocolates! Whatever is your taste, you cand eat all you can in the museum… but not the sculptures!

Take your time, live demonstrations are scheduled all day long! The demonstration centre and the chocolate makers will reveal to visitors the secret of making shiny and crunchy chocolates.

Before each session, you will watch a short film explaining how chocolate is produced nowadays, from harvesting cocoa until final transformation in chocolate. No one will ever trap you with chocolate knowledge!

You will finally taste several chocolate we make on site, but also different origin chocolates, coming from the best plantations in the world.

CREATE your own chocolates

Different workshops, for all ages, are available to make your own creations! The Chocolate museum is organizing workshops where children and grown up can work chocolate and make their own treets, with one of our chefs !

The apprentices leave with all the chocolates they made, to offer or to share them with their family…

These worshops are available starting at 6 years old and will differ depending on your age and your skills!

FUN for the whole family

A dedicated playful tour for children and their family will have everybody discover the world of chocolate and all its secrets! Your children can also discover everything about chocolate!

An educational booklet is available at the front desk. Treasure hunt, quizz, just pickup what suits your family!

Want to know more ? Book a guide for one or multiple families for a very special tour.

Want to be a chef ? Family workshops are also available – see our online ticketing service for the agenda.

Premiere ! The museum shows its chocolate skills with a new exhibition room and 3 new themes.

The Chocolate Week is coming! Dresses, hats, shoes, handbags… Every piece is designed by the belgiant chocolate artist Peter Teerlinck ! No place for bad taste.

The most famous monuments of Paris are there with massive sculputres. Meet the Arc de Triomphe (3 feet high) or the Eiffel tower (9 feet!). Jean-Luc Decluzeau, is master of these pieces of art, and also presents the sculpture of the majestic Snake god, Quetzalcoatl.

A poem for nature with a serie of sculptures created by Stéphane Leroux, best workor of France. Many pieces representing stones, rocks, reeds, wood, metal… 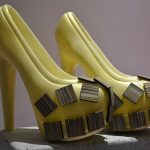 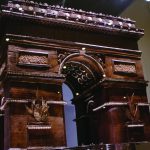 MEET the most famous FANS

Who are celebrities to love Chocolate ? Discover who has left its hand prints on our Wall of Fame! Are you the only fans of Chocolate ?

See all the celebrities fan of Chocolate who let their prints in chocolate!